What a weekend we’ve just shared and two blog posts from me today, as I have just so much exciting news to share with you of OnStage Recognition.

Two years ago I was celebrating at OnStage when I was recognised for having achieved my first Incentive Trip to the Mediterranean. This was me back then with Sara Douglass who was at the time, our Interim CEO … She has subsequently taken on the roll full time of CEO. That event happened to fall over the anniversary weekend of my Dad’s passing. He was looking down on me that day as I walked the stage and celebrated with so many others for my achievements. I was quite emotional that day. 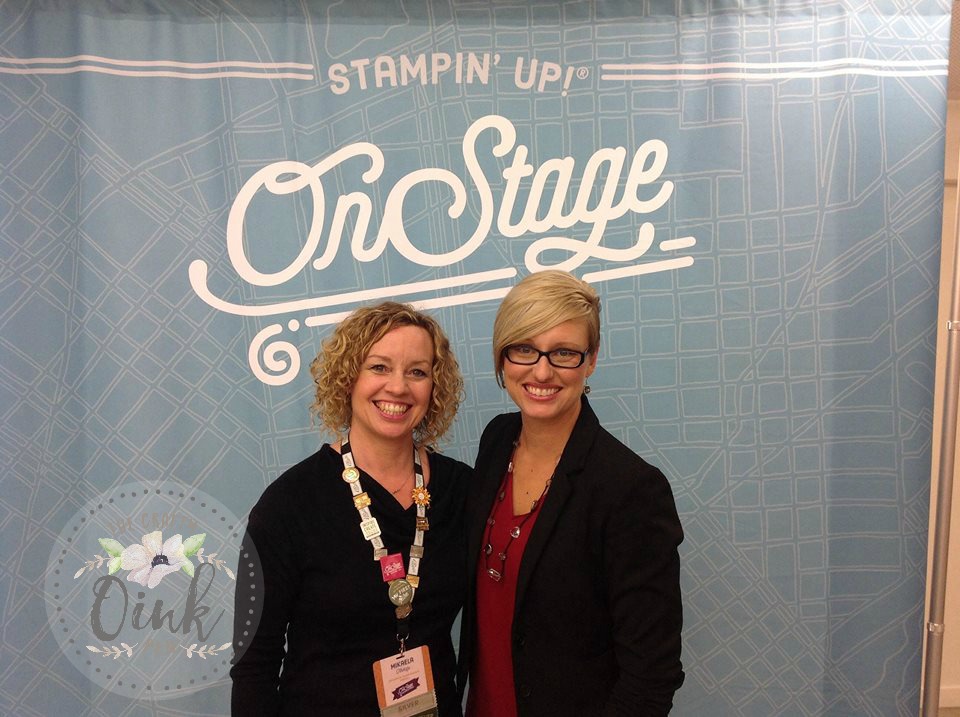 Fast forward two years and again, over the same anniversary weekend, my Dad could this time look down on me, as I was recognised for some truly fabulous achievements of this past year and one that totally shocked me.

November OnStage is the time when most Recognitions are announced, as this coincides with the Stampin’ Up! year end.

This past year I took Promotion to Gold, which came about when one of my downline promoted. I’d been sat with the right number of sales and recruits for a while, but was just waiting for one of my downline to take that all important Silver Elite title for me to move up. Mo Rootes was the one to achieve it, following her downline, Lyndsay Hickson, taking Promotion to Silver. It was a like a Domino effect with celebrations all round that week.  Well this OnStage saw us all being acknowledged for those achievements and never a prouder moment than seeing Mo walk that stage in recognition of her achievement. Very well deserved.

Back then in Brussels I walked the stage for recognition of my achieving my first Incentive Trip. This year, I did it again, but for a trip of a lifetime to Alaska. With the support of another Team headed by the lovely Natalie O’Shea, I walked that stage proudly with Natalie and her girls to mark this achievement and look forward to sharing the time on the cruise with them and others next year. 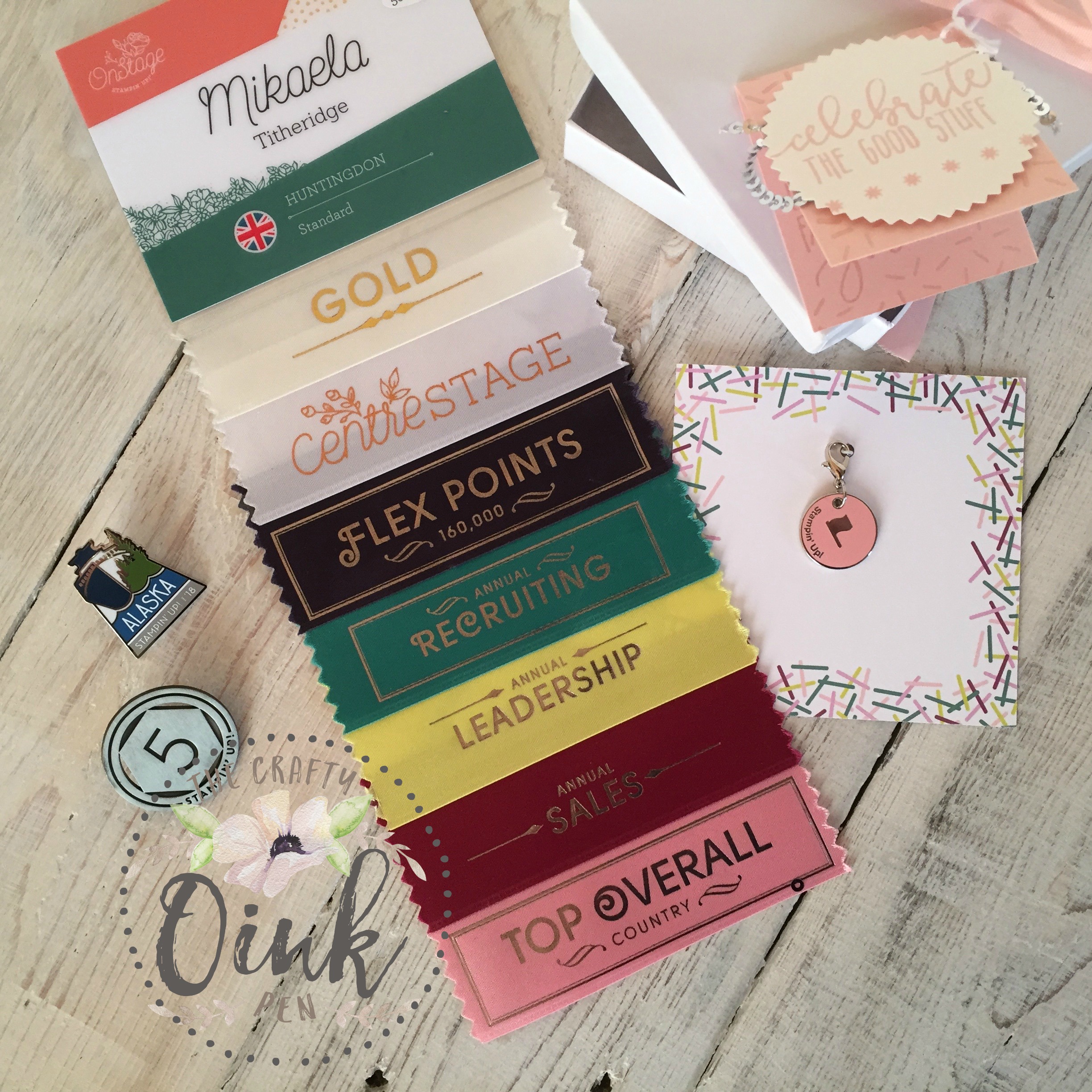 Peppered throughout the day were other recognitions that applied to many of the Team. QuickStart Achievements (an incentive for those wanting to get their business off to a rapid start), Title Promotions to Bronze Elite, Silver and Silver Elite … First time attendees of OnStage, New Demonstrators and more. It really was wonderful to see so many of the team being recognised and seeing their faces as they each took their moment with pride.

Then came the one that knocked me sideways. Up on the screen came a recognition piece that would be awarded to the next group called out. It was at this point that for some reason, I went off into a little day dream. I was away with the fairies somewhere. I was aware that the countdown started from 10 and was working down to 1, but it was when my team were yelling at me to go up that came as a shock. 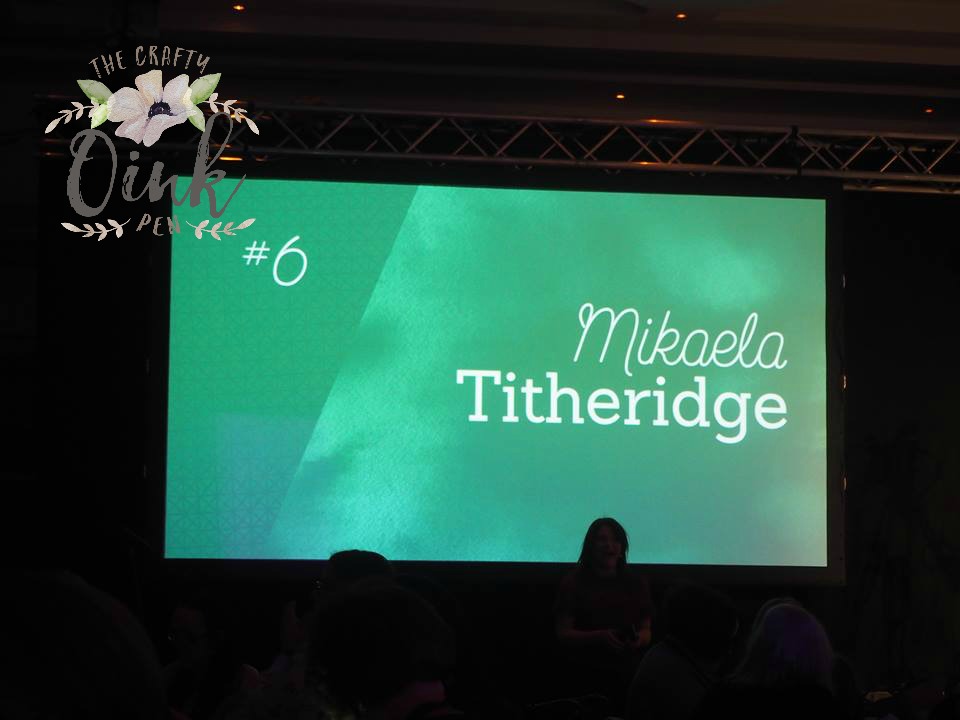 There it was … as I was heading down towards the stage, my name was up there across the screens.  ‘#6 Mikaela Titheridge’, but having been in my day dream, I had no idea what for. Yes I know … bad of me to have temporarily drifted off, but it had been a long day without my usual fix of strong coffee. Side of stage I was Congratulated and told what I was going up for … 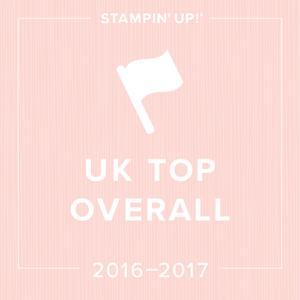 … well my jaw dropped … seriously? Me? There are so many Inspiring Demonstrators who appeared to be far more worthy, but Stampin’ Up! has a set of formulas that they follow to figure out where a Demonstrator is ranked in each country. It is based on a lot of factors like Sales, Recruiting and Leadership activity, but also the performance of their downline. It’s a way of highlighting that we are doing all the right things as Leaders.

Yes, hugs at the foot of the steps by our UK Manager, Paula Gory confirmed it. I must have looked in total shock on that stage. My heart was racing. I’m told that my team were going nuts screaming for me, but up there in my little world of shock, I couldn’t hear anything. It was as if I were in a dream and Dad again, watching over me. 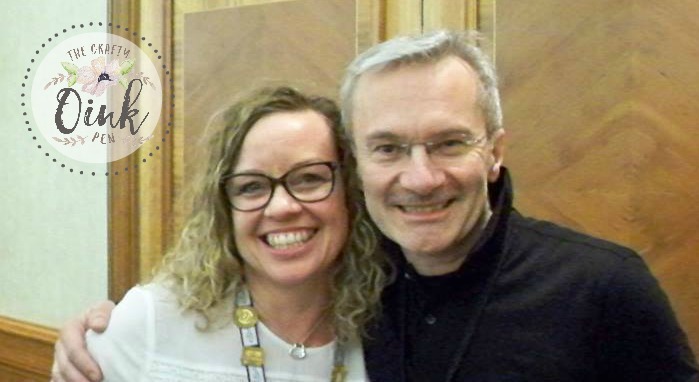 The wonderful Chris Lee from Demonstrator Support was at the base of the steps with a big smile on his face. I think he could see my astonishment. I even started to walk off without receiving my award (the pink charm seen above and the pink ribbon to the bottom). Last night when the full Global list were published (they only announced the Top 100), I ranked #129 out of 50,000 Demonstrators worldwide!!

WOW Seriously, this year has been amazing and with so much going on at home, astonishing that I’ve managed to achieve anything really.

Which just leaves me to say a big Thank you to all of my customers and class/event attendees, to those who follow me, to those who click ‘like’ and share my news on Facebook, to my supportive Demonstrator friends out there who support and encourage without any reward, to my Team for all their efforts and support of me and to my family for standing by me … now it’s starting to sound like an official awards ceremony speech … but seriously, Thank you. I am quite literally overwhelmed right now.

What wonderful news I had to share with my Mum this year on the morning of the 20th Anniversary yesterday.

Trimming the Town is for more than just Christmas.

Sharing a post from the Stampin’ Fancy Friday wh

Were you a Party Animal at the weekend like these

Do you like Mini Treats? Well, Mini Treat Boxes is

We use cookies to ensure that we give you the best experience on our website. If you continue to use this site we will assume that you are happy with it.Ok